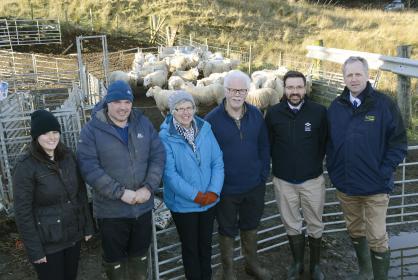 The enthusiasm, honesty and willingness of the new Lochaber Monitor farm hosts to make changes to improve their business was welcomed by local farmers at an open meeting last week.

Strone Farm, near Fort William, is run by Chris Cameron in partnership with his parents Malcolm and Eileen. During the first meeting the family shared the details of their farm management and performance with over 50 farmers and representatives from the farming industry.

The Lochaber Monitor Farm is one of nine monitor farms that have been established around Scotland in a joint initiative by Quality Meat Scotland (QMS) and AHDB Cereals & Oilseeds. The aim of the programme is to help improve the productivity, profitability and sustainability of Scottish farm businesses.

Malcolm and Chris Cameron outlined how their cattle and sheep enterprises had evolved and highlighted the challenges they faced.

The farm’s 40 strong herd of Limousin cows are currently calved throughout the year and, due to weather and limited grass, are housed from mid-October to mid-May.

Heifers are generally calved at two-and-a-half years old with calves sold at Dingwall auction mart at around 10 months old, weighing around 375kg. The registered pedigree herd is in the Hi Health scheme and the Camerons have operated a closed herd (except for bulls) for 20 years.

The sheep side of the business sees 500North Country Cheviots which are either put to a Lleyn, Cheviot, Suffolk cross Beltex tup, depending on the ewe replacement strategy. A scanning percentage of 120% is achieved for the ewes and a lambing percentage of 95%.

The ewes lamb outside in April and, due to a serious predation issue, the ewes and lambs at foot are then moved to grazing land in Inverness over the summer. Lambs are sold at Dingwall auction mart as store at the end of August or kept for replacements.

All nine of the monitor farms in the programme, which is funded by the Scottish Government and European Union’s Knowledge Transfer and Innovation Fund, will conduct an environmental audit in order to explore opportunities for habitat improvement through environmental schemes.

This showed that some of the land farmed by Strone, which already receives support through agri-environment and woodland schemes, provides a habitat for black grouse and several species of butterflies and plants, as well as some ancient woodland.

The audit also highlighted areas of environmental concern for the business which included the presence of bracken and rhododendron on some parts of the land, as well as the threat of a growing population of feral pigs.

Continuing in their spirit of openness and transparency, Chris and Malcolm Cameron opened their farm accounts at this first meeting and Niall Campbell, also from SAC Consulting Oban and a project facilitator for Strone, presented a breakdown of the businesses current income and expenditure. He highlighted that, although the farm was profitable, its high fixed costs were something the Camerons were keen to address.

“There is no doubt that things will change with regard to farm support payments and that there is a degree of uncertainty ahead for the industry. Farmers should, like the Camerons, prepare for change to safeguard their businesses for the future,” said Mr Campbell.

The gathering also considered the strengths and weaknesses of the current Lochaber monitor farm business as well as the future opportunities and threats for the farm.

“Dad and I believe that it is important that we should be completely open about both the management and the financial situation of our business from the start,” said Chris Cameron.

“We know there is plenty of scope for the farm business to benefit from fresh ideas which could improve our efficiency and that is why we were happy to become monitor farmers.”

He added: “We hope that other farmers will get involved and benefit from following not just what we will be doing over the next three years, but from the wider monitor farm programme too.”

The Lochaber Monitor Farm will be hosting a series of regular meetings over the next three years focusing on the technical and financial challenges that the business, and many other farming businesses in the area, face.

The next Lochaber monitor farm meeting will be held on Strone Farm on Thursday 9 March. If you are interested in attending the next meeting, or wish to join either the management group or business group that accompanies the monitor farm project, please contact Niall Campbell or Morven MacArthur on 01631 563093 or email fbsoban@sac.co.uk.