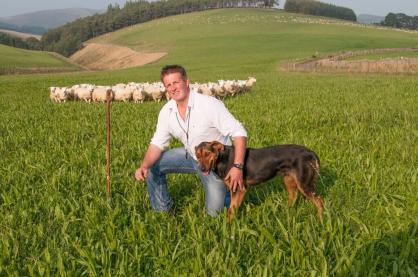 The next Shetland monitor farm meeting on Saturday 8 June will focus on effectively managing change and experimenting with new ideas for farm businesses.

The meeting will start at the Ness Boating Club and then move to Scholland Farm where Monitor Farm Management Group Chairman, Jamie Leslie, will host the meeting and will update the community group on the crop trials he is running at his farm.

Mr Leslie, who farms in partnership with his father John with help from brother Alistair, cousin Steven, wife Louise, and his three children, runs 1000 ewes and 80 cows. He also contract farms at Sumburgh Farm.

Mr Leslie has been rotational grazing his livestock for a few years and has previously experimented with forage crops such as plantain and fodder beet. This year, along with Bigton Farm, the Lothians Monitor Farm Prestonhall Farms, and the Angus Monitor Farm Mill of Inverarity, Mr Leslie will trial Salome, a Scandinavian barley variety.  He will also discuss his entry into the national Grass YEN (yield enhancement network) which is judged on the MJ of ME/ha over two silage cuts.

“We are looking forward to welcoming the community group back to Scholland, where we will follow up on our fodder beet trials from last season including costings and ewe performance. We will also have a look at the Salome barley and grass trials and discuss what we have tried to achieve with the trials and what procedures we have gone through,” said Mr Leslie.

Also speaking at the meeting will be Jim Logan from Pirntaton Farm, Galashiels. Pirntaton is a large upland livestock unit in the Scottish Borders extending to 540 hectares effective, where he runs 1,950 breeding ewes, 120 suckler cows and an expanding deer herd presently numbering 200 hinds. Mr Logan will speak about the process of change, focussing on the introduction of a more forage-based system and rotational grazing at Pirntaton which has enabled a significant increase in the size of his ewe flock as well as the addition of the deer enterprise.

“Change can be hard at the beginning, messy in the middle, but seldom not worth the effort in the end.”

At the meeting on Saturday 8 June, Kirsty and Aimee Budge will also update the group on developments at Bigton including the barley trial plots and their grazing management plans.

The Shetland Monitor Farm is one of nine monitor farms that have been established around Scotland in a joint initiative by Quality Meat Scotland (QMS) and AHDB Cereals & Oilseeds. The aim of the programme, which is funded by Scottish Government, is to help improve the productivity, profitability and sustainability of Scottish farm businesses.

The meeting on Saturday 8 June, which is free to attend, will begin at Ness Boating Club at 1:30pm. BBQ dinner will be provided, and the meeting will finish at approximately 6.00pm.