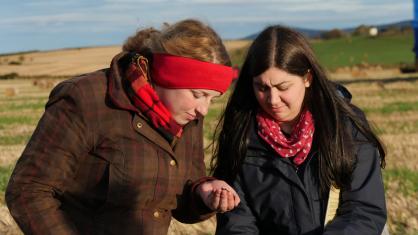 Morayshire monitor farmers Iain, Laura and Jemma Green revealed the results of their #soilmyundies experiment at a meeting for local farmers recently.

The Greens are one of the latest to join the #soilmyundies craze, where farmers bury 100 per cent cotton underpants in different parts of the farm, to start discussions on the activity of soil biology.

Eight weeks ago Iain buried seven pairs of undies around his farm: in fields of spring barley with and without biostimulants; in a field margin; under 2-year-old grass; under winter barley stubble; in a PGRS field; and in a spring barley try-out field.

The theory is that the more active the soil biology is, that is, the healthier the soil and the more degraded the pants will be.

The most unwearable pants – those most broken down by soil microbiology and earthworms – were those buried in a barley field which had been treated with biostimulants.

Iain says: “The pants in the worst condition were almost unrecognisable, so it seems that the biostimulants field had the most biological activity, and if that is the case it will be really interesting to see what effect that has on the yield.”

However, one of the surprises was the underwear buried beneath permanent grass at plough depth was more in-tact than expected.

AHDB Cereals & Oilseeds Knowledge Exchange Manager Gavin Dick said: “Usually you’d expect permanent grass to have a lot of soil biology activity. But we now have a trend of wetter, milder autumns and less frosty winters. This means that cattle are often left outside longer in less than ideal conditions. The livestock cause a layer of compaction and there is then less frost in the winter to break up that compaction.”

The results of #soilmyundies also seemed to show some of the impact of the huge amount of rain at Corskie Farm. Between 1 June and 30 October 2017 they have had 612ml – nearly all of the annual average 700ml. Fields that were wet for too long had poorer levels of soil biology activity.

Of course, it’s not just burying pants which highlights soil health  on farm. Out in the field, the Monitor Farm group discussed simple ways to examine soil health, using just a spade, a knife and their senses, as well as more structured methods such as using a visual soil assessment (VESS) test to simply assess soil texture by sight.

The final message of the day was around choosing the correct tyres for farming operations.

In the field, the group saw the impact on the soil of different tyres at different pressures, with a demonstration from Tony Powell of Michelin Tyres.

Iain Green said: “It was very interesting today. A lot of growers do not pay enough attention to soils, but it is our biggest asset. We also heard about the difference between dual and single wheels, standard, flotation and super single tyres, and the effect they have on the soil.

The Morayshire Monitor Farm is one of nine monitor farms that have been established across Scotland in a joint initiative by Quality Meat Scotland (QMS) and AHDB Cereals & Oilseeds, with funding from the Scottish Government. The aim of the programme is to help improve the productivity, profitability and sustainability of Scottish farm businesses.