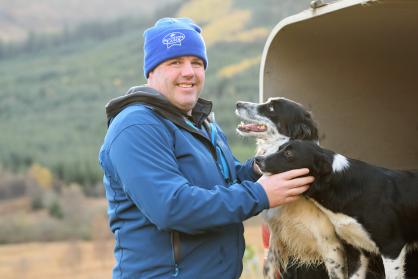 The changes introduced at Strone Farm during its first year as the Lochaber Monitor Farm Monitor will be highlighted by host farmers Chris and Malcolm Cameron at an open day at Strone Farm near Banavie, Fort William on Wednesday 13 June.

The meeting, which will begin at Strone at 1.30pm, will be free to attend and an invitation is extended to all. During the meeting, the Camerons will review the changes they have made on their 1,200-hectare hill farm so far and highlight what they plan to do next.

“So far the monitor farm programme has touched every aspect of our business,” said Chris Cameron. “Our community group is a vibrant bunch and I have enjoyed getting their feedback, good and bad, on the way we currently farm. The project has also seen me grow in confidence which has helped me to drive the business forward.

“We are keen to try and establish, with the help of the monitor farm programme, a business that is financially sustainable and provides a living for the family. We want to make enough net profit to allow for re-investment back into the business,” he added.

During the open day next week, attendees will have the opportunity to hear how the Lochaber Monitor Farm has developed its cattle, sheep and grassland policies and will also visit parts of the farm previously not seen as part of a farm tour.

Chris Cameron has made some significant changes to the sheep enterprise at Strone. The farm runs a flock of 500 Cheviot ewes, and has historically produced store lambs, with hoggs kept as replacements.

Due to a serious predation problem around Strone, ewes have been sent away to lamb for several years. The Camerons recently took on an additional 42 hectares of additional rented grazing at Fassfern, 11 miles from the home farm. This year they lambed their ewes with twins there and the ewes with singles were sent to rented grazing land near Inverness shortly after lambing.

Following a very successful Vision for Hill and Mountain Farming meeting in February, jointly hosted by the Lochaber monitor farm and NFU Scotland, Chris Cameron has been exploring the options available to hill farmers to add value to their lambs and already has some ideas for using this extra grazing.

“I’m keen to see if it would be feasible for us to use the extra grazing land at Fassfern to finish some lambs from our twin-bearing ewes, rather than selling them as store as we have done in the past. We are also running a small fattening trial with Harbro with our lambs are the moment.”

Strone farm also has 40 pure Limousin cows which are in-wintered. During the meeting Chris Cameron’s father Malcolm will report on how the herd is performing in relation to the Key Performance Indicators (KPIs) set by the community group at the beginning of the programme.

Another part of the farm enterprise to be highlighted at the open day, will be the work that has been done to improve the grazing land at Strone. After conducting a detailed soil analysis of several fields at Strone, some have benefited from being ploughed, reseeded, and treated with appropriate levels of lime and fertiliser in order to improve soil health and grass production.

During the afternoon the group will have the opportunity to visit one of the areas which has benefited from investment to discuss the results of the treatments.

“Of all the improvements we have made at Strone through the monitor farm programme, I am most pleased with the grass. We have more grass, it is better quality and so we are getting much better value for money from it,” said Chris Cameron.

Finally, the open day will feature a tour of the hill parks and foot of the hill, an area of the farm not yet visited in previous meeting. The group will also visit Clunes, an area of rented seasonal grazing six miles from Strone that has also benefited from reseeding. Whilst there the group will see some of Strone’s heifers with calves at foot .

The meeting at Strone on Wednesday 13 June will begin at 1.30pm and will end at 5pm. Attendees are then invited to stay on for a BBQ and some light entertainment. As there will be a farm tour as part of the programme, attendees are encouraged to bring wet weather gear.

To book your attendance (and place at the BBQ!) please contact Niall Campbell or Morven MacArthur on 01631 563093 or email fbsoban@sac.co.uk.