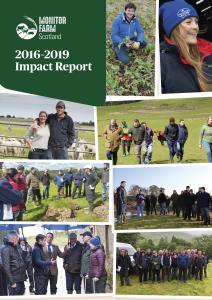 Improved community spirit, better business performance and an openness to change are just some of the benefits experienced by farming groups and businesses involved in the 2016–2019 Monitor Farm Scotland programme, according to a new report launched by Quality Meat Scotland (QMS) and Agriculture and Horticulture Development Board (AHDB).

Funded by Scottish Government, the aim of the Monitor Farm Project is to help improve the productivity, profitability and sustainability of Scottish farm businesses.  Nine monitor farms were established across Scotland in Nithsdale, Lochaber, Sutherland, the Borders, North Ayrshire, Shetland, Morayshire, the Lothians and Angus.

The Monitor Farm Impact Report includes the changes and improvements each of the nine monitor farms have made over the three-year programme.

The report also showcases the results of a survey conducted with those who were part of the project. The survey highlighted that 93% of those who attended a Monitor Farm meeting felt this was a good use of their time. The results also show that 70%  of attendees say the Monitor Farm programme allowed them to form new networks and build relationships with their farming community.

With farming often an isolating and lonely profession, one of the most profound effects of the initiative has been in bringing farming communities together. Meeting regularly and sharing ideas and offering feedback has helped forge new friendships, build confidence and encourage knowledge sharing.

Bruce McConachie, Head of Industry Development with QMS said: “Every one of the nine Monitor Farms has embraced the support of the Monitor Farm network wholeheartedly. The Monitor Farm Impact Report highlights the numerous improvements host farmers have made to their businesses, which, in turn, has made them more resilient and profitable.”

“The results also show that at the heart of the initiative is the support of the whole farming industry. Through regular farm meetings with industry experts and a passionate group of local farmers, knowledge and experiences have been shared.”

Paul Flanagan, Scotland Director for AHDB added: “Gathering data and basing decisions on numbers and evidence has been at the forefront of this initiative. This has highlighted areas that could be improved within individual farm businesses and focused attention on those areas which were underperforming. For some, this has resulted in a complete change in business direction. However, for most of the monitor farmers, making improvements to overall business efficiencies has been about adopting numerous small changes that add up to a big difference.”

The Monitor Farm Impact Report publication can be viewed and downloaded here.