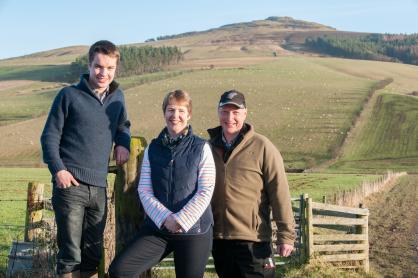 A family-run Borders farm has been announced today (Friday 16 December) as the fifth of nine new monitor farms being established in Scotland in a joint initiative by Quality Meat Scotland and AHDB Cereals & Oilseeds.

Whitriggs Farm, near Denholm is run by Robert and Lesley Mitchell and their son Stuart with support during busy periods from Stuart’s brother, Alistair.

The Mitchells, who are keen to both develop their farm business and safeguard it for future generations, currently farm 442 hectares of mainly semi-permanent and permanent grassland. They also grow approximately 40 hectares of winter wheat and oats for feeding their stock. The farm rises from 400 feet to 1,400 feet and includes local landmark Rubers Law.

Robert Mitchell’s father originally bought Whitriggs farm in 1946 and the family bought the neighbouring Denholmhill Farm in 1999 and now run both farms as a single business.

The Mitchells have 140 suckler cows which are a combination of Beef Shorthorn cross and Aberdeen Angus cross. All the cattle are housed from mid-November and turned out in April depending on grass availability. All calves not required as herd replacements are finished on the farm.

Whitriggs also runs 1000 Lleyn ewes which are put to either a Lleyn, Suffolk or Hampshire tup. Ewes are brought inside in mid-February ready to lamb from 20th March onwards. Lambs generally reach their target 42kg liveweight from August and the family aims to have all the lambs marketed by Christmas.

Whilst the family are fairly happy with their current calving and lambing percentages, they feel there is still room for improvement with the help of the community group of local farmers that will support the farm through throughout the three year project.

In terms of the day-to-day management of the farm, Stuart generally leads on the cattle while Robert focuses on the sheep. Any major decisions about the direction of the farm are discussed as a family, with Robert and Lesley Mitchell very aware that one day the farm will be managed by the next generation.

“Succession is something that we have had to think about for the farm,” said Mrs Mitchell. “We are pleased with what we have managed to achieve so far, but feel that we now need to look for opportunities to develop the business further so that, when the time comes, we can pass down a farm business with a viable future.”

Robert Mitchell added: “I believe that if you are not going forward you are going backward. Standing still isn’t an option for us.”

The family are excited about taking part in the monitor farm programme and the potential to improve efficiencies on their own farm. With pasture playing such an important role in the farming system, grass management is something the Mitchells are keen to improve, as well as their calving and lambing percentages.

Stuart Mitchell, who is also Chairman of the local Teviotdale Young Farmers Club, said he was really looking forward to learning how they could do things better to prepare themselves for whatever the future brings.

He said: “There are lots of young farmers in this area at a similar stage to myself so we really hope that they will get involved as well and benefit from the project too.”

The first meeting of the Borders Monitor Farm is expected to take place early in the new year. Those interested in being involved in the project should contact Stephen Young, one of the project facilitators, on 07502 339613 or email Stephen.young@saos.coop