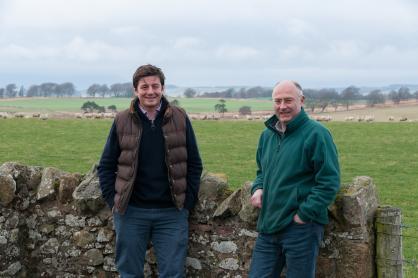 Two Lothians farming businesses are preparing to kick start their journey as joint hosts of a new monitor farm project.

Bill Gray, farm manager at Prestonhall Farms and Peter Eccles at Saughland Farm, both of Pathhead Midlothian, will hold the first of a series of meetings on Thursday 9 February.

The Lothians Monitor Farm is one of nine Monitor Farms recently established across Scotland in a joint initiative by AHDB Cereals & Oilseeds and Quality Meat Scotland (QMS). The aim of the programme is to help improve the productivity, profitability and sustainability of Scottish farm businesses.

Bill Gray at Prestonhall Farms will provide the arable focus with 660 hectares of cereals and oilseeds on a five year rotation while the livestock will be covered by Peter Eccles at Saughland, where they have 1,900 breeding ewes and 55 suckler cows. The two neighbouring farms were once part of the same large estate and the hosts have similar philosophies which has allowed them to collaborate successfully while remaining separate businesses.

Over the next three years there will be eighteen meetings at Prestonhall and Saughhead where local farmers will be able to input into the future financial and technical management of the two businesses. There will also be the opportunity to investigate innovative new technologies in both the arable and livestock sectors.

Prestonhall Farms Manager Bill Gray, says: “I’m looking forward to getting a better handle on how we are currently performing, listening to the ideas of others in the community group and making changes to ensure we have a robust and sustainable business for the future. I believe that this is imperative given the challenges that the agriculture sector faces.”

Lothians Monitor Farm project facilitator, Colin MacPhail, hopes many local farmers will attend and get involved in the project. He said: “This new Monitor Farm programme is different as it approaches the farm as a whole business rather than focusing on separate enterprises. It will be very much driven by the desires of the farmers in the group, who should get as much out of the process as the hosts.  The collaborative working relationship between Bill and Peter has already stirred significant interest in the project”.

The event will begin at Prestonhall with an outline of their arable enterprises before moving over to Saughland for an update on the livestock enterprises. Representatives from QMS and AHDB Cereals & Oilseeds will also give an overview of the Monitor Farm programme and how local farmers can get involved.

Peter Eccles, Farm Manager at Saughland, says: “I want to ensure Saughland is moving in the right direction in creating a financially and environmentally sustainable business for the future. I am focused on analysing our performance to make better informed decisions. Working with Bill will allow us to develop our current collaboration into something more structured, drawing on each other’s experience and sharing resources efficiently”.

The first Lothians Monitor Farm meeting will begin with tea and coffee at 9.30am on Thursday 9 February at Rosemains Farm, Pathhead, EH37 5UQ (just off the B6367). The meeting will finish at 2.30pm. The event is free of charge but to assist with catering it would be appreciated if you can book a place by contacting Colin MacPhail on 07747 046461 or at colin@macphailconsulting.co.uk.