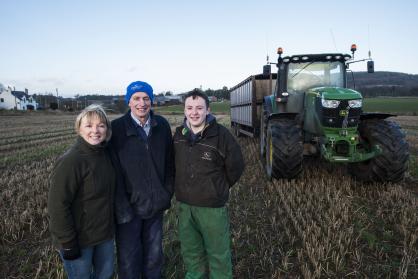 Mill of Inverarity in Angus Announced as Final Monitor Farm Mill of Inverarity Farm in Angus has been announced as the ninth and final new monitor farm being established in Scotland as part of a joint initiative by Quality Meat Scotland and AHDB Cereals & Oilseeds.

Husband and wife team Rob and Alison Stodart farm 358 hectares (152 owned, 206 rented) on two separate units and their enterprises include cereals, suckler cows and sheep. They were keen to join the monitor farm programme to ensure their farm remains sustainable for many years to come

Alison says: “We really want to make sure we have something to pass on to our children. We love farming, it really is a way of life for us, but it needs to be a sustainable business as well. That’s a big part of the reason we wanted to be part of the monitor farm project, to help us become more productive and efficient long-term.”

Rob and Alison have three children, all of whom still live on the farm – Vicky (23), Rory (21) and Tom (18), and both boys work on the farm full time. Like many of the younger generation they are full of ideas and luckily for them, their parents are very open to doing things differently.

“I have always farmed a certain way,” Rob explains, “but over recent years the boys have been telling me I need to try new things. We’re really happy to listen to their suggestions as well as other farmers who might visit the farm as part of the project.”

Rob says: “We are considering reducing the area of spring barley planted for malting, largely because the premium is not very good these days. We could instead look at increasing the fertiliser input so we get a higher nitrogen content and sell it as feed instead. We have also experienced a fair bit of grain skinning over the last couple of seasons which has made growing for malt sector a challenge.”

The Stodarts are also considering some changes to their livestock enterprises. They have just doubled the size of the main flock to 440 breeding ewes (Texel and Texel Beltex crosses) and also buy in approximately 300 store lambs to finish. There are also 200 suckler cows (Simmental Limousin crosses), with 150 stores and 150 finishers. However the family are reviewing whether the current enterprise mix represents the best policy going forward and are keen to assess how they can make the livestock more efficient.

“We have been grazing the cattle out and about at extra cost,” Rob says, “and we want to keep them on farm in future. However, that would mean giving over arable land to pasture and we’re not sure that’s the best idea. Do we reduce livestock or reduce cereals? It’s all up for discussion.”