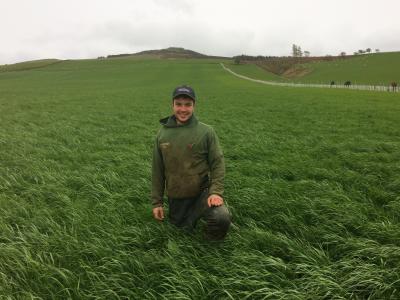 Is the Grass Really Greener for the Borders Monitor Farm?

At the next meeting of the Borders Monitor farm on Wednesday 16 May, the host farmers will share their thoughts on a plant growth enhancer which they have been trying out on their farm.

After one of the most challenging periods of weather Scottish farmers have faced in decades, the Mitchell family at Whitriggs Farm, near Denholm, decided to try out Smart Grass, to help boost grass growth on their farm.

“After the awful weather we had at the start of the spring we wanted to see if we could boost grass growth on the farm to help bring our lambs on, and save us having to buy in extra feed,” said Stuart Mitchell. “However, although we wanted more grass, it was also important that we didn’t compromise on its quality.”

The Mitchells heard about SmartGrass from their monitor farm facilitator and after doing some research sourced  a small amount of the NuFarm Uk product from local distributor MSP. They sprayed 20 hectares of their grass with SmartGrass in the middle of April and have been very impressed with the results so far.

“We could see a visible difference in the grass almost straight away,” said Mr Mitchell.

“The first two weeks after we applied SmartGrass, the grass really shot up but was yellow in colour. Over the next two weeks the grass gradually turned green. Now you can notice a mile away the difference in height between the treated and untreated grass. What we will look to do now is quantify that benefit, so we need to know how much more grass there is and just as importantly, has the quality of this extra grass been affected?”

The Mitchells are very aware that grass quality is also important and will continue to measure and analyse both the treated and untreated grass over the coming months to see if the investment they have made, both in time taken to apply, and the product itself, has been worthwhile.

The Mitchells will also give an update on how the lambing went this year, at the meeting. After discovering that some of their 1,000 lleyn ewes tested positive for Maedi Visna (MV) last year, the family lambed their 300 gimmers in two seperate locations in an attempt to keep the disease from spreading.

“Running two different lambing flocks was definitely a challenge,” said Lesley Mitchell. “We basically had to keep separate tractors and trailors, equipment and tags at each farm to avoid cross-contamination and anyone who needed to work with either flock had to change clothes and disinfect themselves thoroughly.”

The family believe, though, that the precauctions they took have been worth it to re-establish a flock which is  flock clear of the disease.

At the end of March the family sent 63 of their store bullocks to United Auctions in Stirling. At a previous monitor farm meeting the community group thought that the bullocks would average £885 at sale. However on the day they averaged £930, much to the delight of the Mitchell family.

Finally, at the meeting on 16 May, the family will give an update on their decision to compliment their current beef and sheep enterprises with a deer enterprise. With the new deer sheds nearly up, and fencing beginning in May, the 120 hinds should arrive at Whitriggs in September.

After lunch there will be a talk from Mags Granger from RSABI on the importance of identifying and managing stress and mental health issues, with advice on what to do if you, or someone you know is having problems.

The meeting on 16 May, which will be held at Whitriggs Farm, near Denholm, is due to begin at 10.30am and is expected to end at 2.30pm. Lunch will be provided. All are welcome and the event is free.

For catering purposes, those interested in coming along on 16 May should confirm attendance with Stephen Young, one of the project facilitators, on 07502 339613 or email stephen.young@saos.coop.