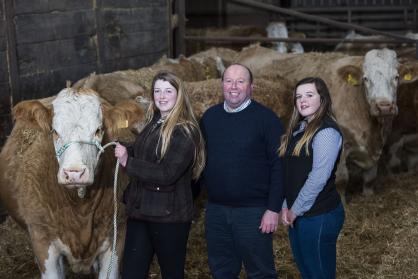 Cereals and silage will be key topics at the next Morayshire Monitor Farm meeting on Tuesday 16 October.

After the incredibly dry summer the group will discuss how the barley varieties Monitor Farmer Iain Green trials for Syngenta have performed, as well as working out a plan for how the farm will cope over the winter with drastically reduced feed.

Iain says: “We need to tackle the lack of forage for the cattle herd at Corskie this year as the farm is extremely short. In some areas we have only managed one cut of silage, while in others we have been able to take a second fairly thin cut. The silage pits on farm are sitting at about 60% of where they would usually be.”

The barley yields will also interest the group, Iain has been trialling the newest varieties on his farm, and perhaps unsurprisingly the top performers this year were those newer varieties including spring barley variety Laureate, and winter barley variety Libra.

The farm has also been trying out the Beef Monitor system which weighs cattle each time they take a drink. The group will find out more about how the 50 cross bred finishing bulls using the system have been getting on. It’s already proving to be good value with Iain able to monitor the performance of his stock using an app on his phone.

“It’s a great system,” Iain says, “It allows us to keep an eye on the bulls’ growth without having to handle them or put them through races. Not only is it saving time and labour but I think it is less stressful for the animals.”

Harry Henderson from AHDB will be at the event to describe the Machinery Review carried out on Corskie as part of a project to look at machinery and labour costs on Monitor Farms across the UK.

Although the reviews found huge variation between farms, the key thing for Harry is that machinery costs are too high.

He says: “There are growers using very high capacity machinery and not getting the return on expenditure in either reduced labour hours, costs or higher yields.

“At the event in Morayshire we’ll be discussing how farmers can get the payback from machinery through focusing on their attitude to risk; sure you can have the biggest combine harvester to cover all weather patterns but at what point does it become uneconomic?”

The Monitor Farm meeting will take place on Corskie Farm, Garmouth, IV32 7NN, on Tuesday 16 October from 1pm to 4.30pm.  The event is free of charge but to assist with catering it would be appreciated if you can book a place by contacting Samantha Stewart by phone (01343 548 787) or email (samantha.stewart@sac.co.uk).