Collaboration and Co-operation is Key to Success for Farming Businesses 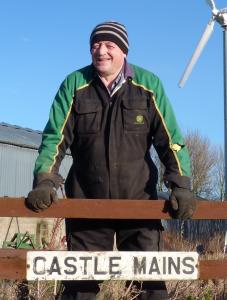 The benefits of collaboration and partnership working will be the subject of the next Sutherland monitor farm meeting on Wednesday 13 March.

At the meeting, which is being held at Brora Golf Club and begins at 11am, Bob Simpson from Castlemains Farm near North Berwick will speak about how his business has benefited from working collaboratively with others.

Mr Simpson is a keen advocate of co-operative working and has seen both his own, and other rural businesses in his area flourish as a result of working together and establishing farmers’ co-operatives.

At the meeting Mr Simpson will highlight three ventures that he has been involved in over the last twenty years. The first, ‘’Law Farmers’’, was established in the early 1990’s and involves six arable businesses. Together the businesses benefit from economy of scale as they buy fuel and fertiliser together. The group have also invested jointly in two large combines that are shared between the businesses as well as being available to several other local farms on a contract basis.

Mr Simpson also profited from being part of ‘’East Lothian Potatoes Group’’ for 15 growing seasons where he, along with a dozen other potato growers, produced a combined 7,500 tonnes of potatoes each year, with the group negotiating the price with major crisp manufacturers collectively.

The pea growing enterprise at Castlemains is also part of an active co-operative – the ‘’Scottish Borders Produce’’ which has over 50 members in the north of England and south of Scotland. Together they negotiate the price of the peas they grow (a total of 1,556 hectares in 2017) and, with the support of a central co-ordinator, ensure the peas are supplied to the freezing plant in Eyemouth throughout the year within an hour and half of them being harvested.

Mr Simpson is adamant that being part of the co-op has been good for his business. “Unity is strength,” he said.

“Being part of co-operatives has allowed me to increase the efficiency and profitability of my business in so many ways; sharing labour and machinery costs, cost savings when buying fuel and fertiliser collectively and bigger bargaining power when selling my product.”

Collaboration is something that Jason and Victoria Ballantyne from Clynelish Farm, Sutherland’s monitor farm, are very keen to try and establish in their own area.

“Bob has a great take on how farmers working collaboratively can achieve more and we’re really looking forward to hearing from him. We feel there is a huge amount of potential for arable and livestock farmers in our region to work better together to benefit all businesses and it will be interesting to see what comes out of this meeting,” said Vic Ballantyne.

At the monitor Farm meeting in December the community group were asked to come up with some ideas for scenarios for change for Clynelish to help them improve the farm business. Following this the Ballantynes have chosen six of these options for further consideration and budgeting.

Kev Bevan, a senior consultant from SAC Consulting, has done some forward budget costs for each of the six scenarios and will present his findings for each at the meeting, explaining the different impact each option could have on the profitability of the current business.

“We have been talking about making some pretty radical changes for a while, but a big leap of faith needs some good numbers behind it,” said Jason Ballantyne.

He added: “Everything is on the table, including total restructure of both the cattle and sheep enterprises. Kev knows our business well having benchmarked it for over 10 years, so we are very interested in hearing what options are viable and what those in the community group think of them.”

Clynelish Farm is one of nine monitor farms established in Scotland as part of a joint initiative by Quality Meat Scotland (QMS) and AHDB Cereals & Oilseeds with funding from the Scottish Government. The aim of the monitor farm programme is to help improve the productivity, profitability and sustainability of Scottish farm businesses.

The meeting at the Brora Golf Club on Wednesday 13 March is free to attend and open to all. It will begin at 11am, with coffee and registration from 10.30am. Lunch is included.

Farmers interested in attending the next Sutherland monitor farm meeting should confirm attendance with the facilitators Willie Budge or Cat MacGregor by phoning SAC Thurso on 01847 892602 or emailing fbsthurso@sac.co.uk.